A Moment to Stop and Grow! 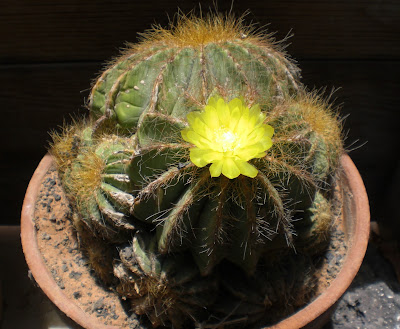 I love cactus plants and this beautiful flower appeared yesterday on one of the cactus in our garden. The flowers do not last for long, but to me they are always a surprise and I love their vibrant colours.


Cactus reminds me a little of writing. The plants vary in size: their colours can be vivid or pale, their spines can be like fine hairs or hypodermic needles that pierce the skin with pain! And then they surprise you with beautiful flowers. Writing can be a little like the cactus at time. The new book you’ve had racing around your head for so long begins to grow, a small seed that germinates and grows as words flow rapidly tumbling out faster than fingers can hit the keys or ink can scratch the paper, and then without warning, like a drought the flow stops. You look around and search manically for those droplets to feed your new plant, but nothing. The pain at the loss of word flow is a pain that grows and then when you thought you had nothing but spikes piercing you, tormenting you to keep searching, unexpectedly a flower emerges and opens: vivid and bright and suddenly there is a new flow of words. It seems that nature just needed a moment to show you, your mind needed a moment to stop, rest and grow.


My week has been like my beautiful cactus, a tad spiky at times, and yet a flower has emerged as I now have the working title for my latest book:
The Summer of Sixty Five.

What happens in the summer of sixty five will change the lives of three families forever. Love and lies can destroy, but it will need love and forgiveness to rebuild shattered lives.

I’ve not yet managed to get to the point that I can type The End, but I’m closing in and I know when I do type those two words, it will be like the vivid flower on my cactus.


Thank you for stopping by and as always, sending sunny smiles from our steaming hot island!

Much More Than Hot Air!

We seem to be having some seriously hot temperatures at the moment and as I write it is 36.4c in the shade in our garden. But what makes the heat unbearable is the hot air, which remains long after the sun has gone down and throughout the night.

We are around 70 miles from the Moroccan coast so if the wind direction is from the east or south we have a amazing hot winds. To give you some idea how these winds feel, it is like having your fan oven on maximum temperature then opening the door just as the thermostat clicks off! The heat that rushes out is not unlike the hot air that has been circulating around the island this last week. Hence why I am in my office writing a post with the doors firmly closed and ceiling fan whirring away, and no, we don’t have air-co!
Though for the tourists who have arrived on the island for the summer holidays, they are very happy indeed! Perfect beach weather!


Despite the heat, the week has been another busy one. On the Famous Five Plus front, there have been three great Indie authors join the Group, bringing the numbers to 27. FFP is truly international with authors from Australia, USA, Canada, UK, Italy, Portugal & Qatar. There is an amazing list of titles from these great writers from thrillers, memoirs, humour, sagas, war, Young Adult, fantasy and more. FFP really has something for every reader.


On my book front, Sometimes It Happens… should be available in paperback by the end of August, making this B.R.A.G Medallion Honouree available in Kindle and paperback.


My fourth novel, title yet to be confirmed, mainly because I haven’t agreed on one yet... sigh, is progressing well as the word count nears 80,000, though the end is still a few more chapters away! The story is set in 1965 in the north of England and I will reveal more as soon as I’ve written the two most important words: The End.


It looks like our hot weather will continue and so must my writing! So whatever your week has been like I hope you found time to sit in the garden, chill and read a good book.


Have a fabulous day and thanks for stopping by to catch up.

Today, I'm over at the Indie site, Famous Five Plus talking about the tragic true life events that inspired me to write Magnolia House.

Hope to see you there http://www.famousfiveplus.com/

As you know  last week Sometimes It Happens... received an Honoree B.R.A.G. Medallion Award, and I've done nothing but brag about it since. LOL!

Today, I'm off again as B.R.A.G. have added a wonderful 5 star review on Amazon.com to support their award... here it is!


By RARC This review is from: Sometimes It Happens... (Kindle Edition)

***** This 2012 B.R.A.G.Medallion Honoree is a love story, a mystery and British humor at it's best! It is certainly worth a readers time and money-


Okay, I'll slope off now and try not to smile too much!

Have a fabulous day and thanks for letting me share my good news with you!
Posted by Pauline Barclay at 11:32:00 2 comments: 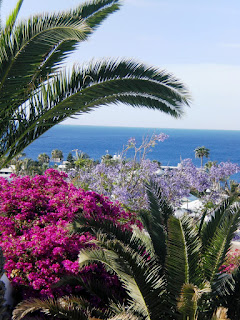 'Thank goodness it's Friday,' echoes around the place as everyone looks forward to the weekend.

For me, I'm going to try and sit down and sit still, read a book, listen to my ipod and work on my new book. That is the plan, though I confess to being a fidget, I'm at my best when busy! But as the weather here is brilliant if not a tad hot, it has a habit of slowing things down, including me!

So what are your plans?
Whatever they are have a fabulous weekend.

July It's Time for a Dip!

It's July already and my year of desiging a poster for each month means I have already created 7!


July's poster is about summer and especially thinking about taking a dip, be it in the sea of into a good book. Hope you manage to do both! 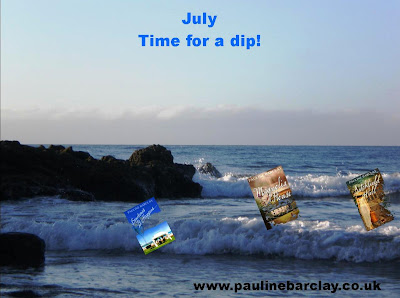