Casting Light Upon the Darkness 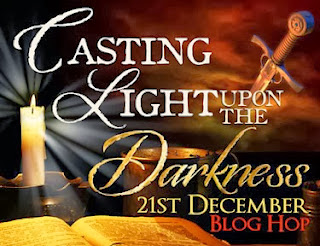 I am joining in a Blog Hop with Helen Hollick today, December 21st 2013 - the longest night
Entitled: Casting Light Upon the Darkness

Theme is shedding light on something puzzling or unknown.

Shedding Light on a Traditional Pie! 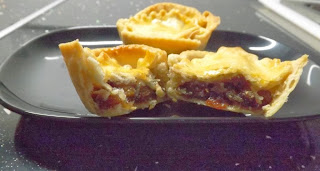 One of the things I love about Christmas and that is mince pies. Many months before the festive season is even thought about, I prepare my own mincemeat, adding my own measures of spices and fruit and always left soaking in lashings of brandy. Then a couple weeks before Christmas I make my first batch of mince pies, to test of course!
But did you know that the mince pie has its ingredient traceable back to the 13th century when returning European crusaders brought with them Middle Eastern recipes containing meets, fruits and spices?
The early mince pie was known by several names, including mutton pie, shred pie and Christmas pie. Typically its ingredients were a mixture of minced meat, suet, a range of fruits and spices - cinnamon, cloves and nutmeg.
But no matter where your mince pie comes from, enjoy! 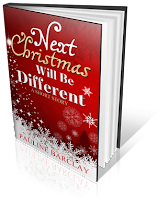 To get you into the festive spirit, my 20 minute short story, Next Christmas Will Be Different is FREE to download from Amazon co uk and Amazon com

Thank you for stopping by wishing you and all your loves ones a very Merry Christmas!

Now take a peek at the other fabby posts on this special day....

You've made me hungry now and I haven't baked any yet! Better put it on the list...

Well done, Pauline, two major winter festivals celebrated in a single post! My purist friend once made mince pies from a Victorian recipe that used real meat, and actually they were surprisingly nice. I suppose all the alcohol and sugar stops it going off. Think I'll be sticking with the modern ones though!

Hello Wendy, thanks for stopping by and enjoy your mince pies :)

Hello Debbie, mmm they sound ok, but like you, I'll stick the ones we are used too. Thanks for stopping by. :)

I love making mincemeat too - it makes the house smell lovely and Christmassy! Of course, I leave out the meat for a veggy alternative - not the brandy though.

How interesting, Pauline! Do you have a favorite recipe you'd be wiling to share?

Hello Lucienne, thank you for stopping by. In mincemeat there is no meat! Have a wonderful Christmas.

Hi Nicole, I love cooking so I have many and always happy to share. Have a wonderful Christmas.

Fascinating! When I was researching for The Jacobites' Apprentice I came across the interesting fact that, in 1745 (and presumably a lengthy period before and after) there was no such thing as a wedding cake but, rather, a Wedding Pie - also made from meats, fruit and spices baked in pastry. And inside there would be a glass ring. The person finding the ring (and hopefully neither chewing or swallowing same) would be the "next person to be wed".

Hello David, thank you for that, very interesting and thanks too for stopping by. Have a wonderful Christmas.

I'm glad the minced meat has been replaced by all the fruit. Your post has made me feel hungry for some truly festive fare. Happy Christmas.

I'm afraid I don't like mince pies at all, but they look delicious and very festive :-)

excuse me while I raid the cupboard for the mince pies my daughter made!

Hello Beth, enjoy your festive fare and wishing you a very merry Christmas.

Hi Christina, thank you so much for stopping by. Have a wonderful Christmas.

My mother used to make these pies but I don't think they had meat in them. They're not as common now but I'd love to try a good one again!

You're making me lust for a slice!