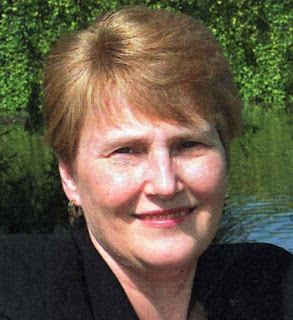 I am delighted to have back around my pool, the lovely Kit Domino, whose latest book was inspired by a visit to mansion back in the seventies. It appears this was no ordinary mansion!

Thanks for inviting me back, Pauline, I always feel at home around your pool. In response to your question as to what inspired me to write my latest novel, White Stones, the story goes way back many years.

I’ve always had a fascination with the supernatural, not that I believe in ghosts as such as I believe all paranormal activity has a rational answer. Most can be easily explained; for the remainder, it’s more a case that the right explanation hasn’t been found yet. But, like many of us, I can’t resist a good, old-fashioned ghost story – it’s just when I hear them, I’m always searching for reasons using science and logic.

In the early 1970s, I lived in a large Georgian mansion perched high on the Cotswolds. It was an isolated, wind-swept location with magnificent views. The house wasn’t spooky but there was a certain “atmosphere” about the place, especially when there alone, which was rare. We had two pianos: a full-size grand in the dining room, and an upright in the children’s dayroom; neither of which I could play, I didn’t know how to.

Conversations often revolved around a particular houseguest some years before who had frequently complained of being disturbed during the night by someone playing the piano, not that anyone else heard it. This occurred so often, after a while the guest refused to stay in the house. During my time there, I never heard anyone play either piano, day or night! The story intrigued me, and we often discussed what the cause might have been, no explanation ever being found.

I had forgotten the story until some 20 years ago when I heard a piece of classical music I hadn’t heard before; a beautiful tune I couldn’t get out of my head, but I had no idea what it was called or who the composer was. This was back in the days before the internet so finding out was exceedingly difficult. During my search, the seeds to a novel were sown, my mind being cast back to the story about the piano-hearing houseguest. It was a simple step to merge both, and thus White Stones grew into the story of a perceived haunting, mysterious music and a frantic search to find the source and the composer, and along the way create Filton Shields, an Unexplained Phenomena Investigator who is already on the hunt for his next case. 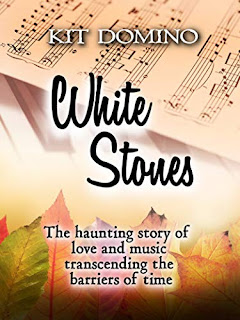 Blurb:
“Walls have ears, but sometimes they also have mouths with which to speak.”

What strange forces are at work causing Penny Cornwall to see and hear people from the past and feel all their emotions? More disconcerting is the tune she doesn't recognise play over and over inside the Cotswold stone cottage she shares with Harry Winchester. Music that will not go away, threatening to destroy the rural idyll she and Harry have found. Thus a fruitless search to find the source of the music and its title begins, a quest that rapidly becomes an obsession taking over her life.

Can the intervention of an eminent archaeologist find the answer to the music's connection to their cottage in time and, in so doing, unravel the tragic story of a love bound by the music transcending the barriers of space and time?

A signed copy of White Stones is up for grabs to the first person who correctly names the theory discussed in White Stones.
Please leave your answer in the comment box and how we can contact you… thank you. 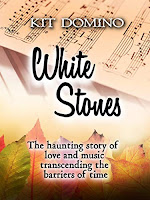 White Stones is now available worldwide in e-formats and released as a paperback on 17 September 2019. Links: books2read.com/Whitestones

Thanks for having me on your blog, Pauline. You've done a grand job as always.
Best Wishes
Kit
x

You are always welcome, Kit x