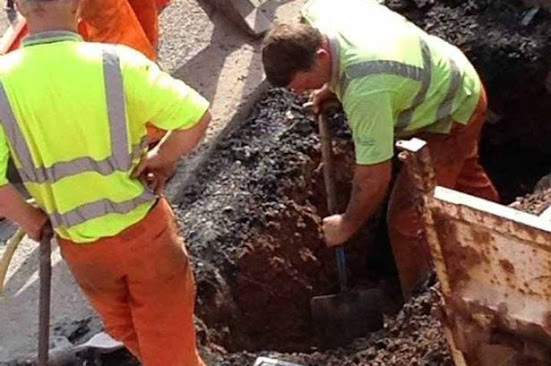 There is nothing more entertaining than little tales that make you smile. So in an attempt to brighten up October I am running a special feature titled, Anecdotal. Anecdotal is where a few special peeps share a little story that has amused or left them speechless. Today, we have an entertaining tale from, Kerena Swan, Health and Safety. Please sit back and enjoy.

‘What are you looking at?’

‘Mind your own business.’ Jim twisted away from the window to face Maisie. ‘It’s man’s work.’ He turned back to the window, tugged the long curtain over his back and sidled closer to Johnnie. Maisie huffed and walked away.

I looked past the garden to the road. Barriers had been erected and a team of men were wielding shovels, heaving soil from the ground. More roadworks.  Gas this time or water?

Jim and Johnnie were riveted by taut muscles, fluorescent jackets and the ever increasing pile of soil.

‘Go and watch if you like. Don’t get in the workmen’s way though,’ I told them.

‘Nah, you’re alright.’ Johnnie held one hand over his left eye and rocked back and forth. He did this when he was excited. The curtain tangled around him and he nearly banged his head on the window.

‘Shall I open the curtains so you can see? I could bring tea and you could sit and watch the workmen.’

‘Yeah, please.’ Jim never said no to a cup of tea. He turned to me and grinned, displaying empty gums.

‘Where are your teeth, Jim?’ I asked. A lifetime of epilepsy and behavioural drugs were to thank for his empty mouth but his smile was all the more engaging for it and I found myself grinning back. The long-stay hospital he was detained in for years probably didn’t provide much dental care either. He tapped the bulging top pocket of the thick-checked shirt he insisted on wearing, whatever the weather.

‘You might need to put them in if you want a biscuit with your tea.’

‘I’ll dip ‘em.’ He said and turned his attention back to the workmen.

I could see him eyeing up the wheelbarrow. Jim had a passion for wheelbarrows. The other day there were three on the lawn. I made him take them all back. Jim’s own one was never enough.

‘Don’t even think about taking that wheelbarrow, Jim.’ I said. He chuckled.

The refreshments were consumed in record time, Jim and Johnnie’s eyes barely leaving the entertainment outside. Workmen wiped foreheads on shoulders and stripped off shirts exposing their glistening skin to the heat of the sun.

‘Would you like your dinners saved so you can stay here?’

Jim and Johnnie both smiled. Everyone else filed into the dining room for meat pie and mashed potatoes. Maybe we should plant potatoes if they were so keen on digging.

The workmen looked longingly at the pub opposite then each other. Downing tools they pulled on their shirts, fixed barriers around the hole and pile of soil then ambled across the road to quench their thirsts with cold lager.

‘It’s fine,’ I said. ‘They’ve put barriers around it. No-one will fall in. Come and eat your lunch.’

Half an hour later I looked again. I saw the workmen return from the pub and watched as they stared at the scene inside the barriers. One rubbed his jaw - another scratched the back of his head. They glanced at each other then back at the ground before turning to look behind them and ahead up the road. I wondered what was wrong. I studied the spot where they’d been working then realised the pile of soil had gone. There was no wheelbarrow either.

In the hall I saw no sign of Jim or Johnnie. I stepped outside and spotted them several feet from the unhappy workmen. Getting nearer I could see that what was once a deep hole was now a neatly flattened rectangle of fresh soil. I walked over to Jim.

‘It was dangerous,’ said Johnnie.

They turned away and glanced at each other with satisfied smiles before walking back home.

You can find Kerena's other stories HERE