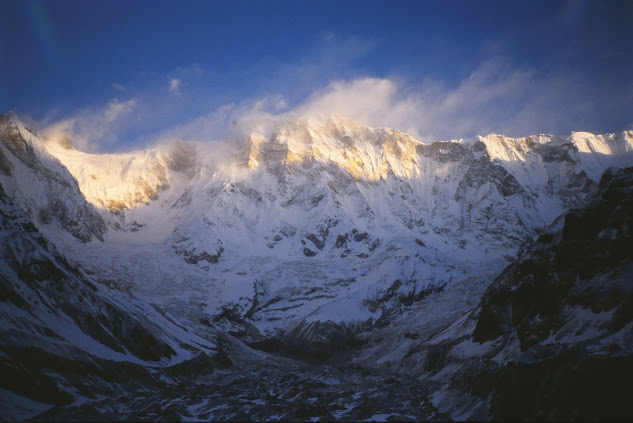 The Annapurna range at dawn

There is nothing more entertaining than little tales that make you smile. So in an attempt to brighten up October I am running a special feature titled, Anecdotal. Anecdotal is where a few special peeps share a little story that has amused or left them speechless. Today, we have an entertaining tale from, Jayne Davis. Outdoor loos in the middle of the night
Please sit back and enjoy.

I’ve reached the age where drinking too much tea before bedtime guarantees having to get up in the middle of the night. Perhaps this reminded me of a holiday a couple of decades ago where the loos were mostly holes in the ground in a hut, and the night temperatures below freezing.

Horrific, you think? A bit cold, certainly, but I could not be sorry at all.

I was on a trek in Nepal, heading for the Annapurna Sanctuary, and we were staying in tea houses. The weather was usually fine during the mornings, but as we trekked through the day the clouds invariably gathered, and when we finally stopped for the night we were usually in a cloud, and often had little idea what the surrounding scenery was like. There wasn’t much to do in the evenings, so after drinking numerous cups of lemon tea or ginger tea (NOT the yak butter tea!) we retired by about eight.

And, naturally, all that tea had worked its way through the internal plumbing by two or three in the morning. Cue wriggling out of sleeping bag, already clad in longjohns, socks and thermal tops, adding the down jacket and making my way to the outside loo.

We were lucky enough to be there while the moon was almost full most nights. The clouds had cleared, and after doing the business I would stand taking in the moonlit scenery—high, snow-clad peaks and deep, shadowed valleys—until my toes froze and I had to go back to bed.

The best night was when we reached the Sanctuary itself – a bowl in the mountains at 4000 m altitude, surrounded by the peaks of the Annapurna range about 3000 m above us. During the day, when we’d arrived, there’d been the frequent sound of rocks falling somewhere in the basin. In the middle of the night, with the snow lit by moonlight, it was silent. The cold had frozen the rocks in place. It was a magical five minutes I will remember for ever.

So, not all outside loos are a bad thing…

Find out more about Jayne at